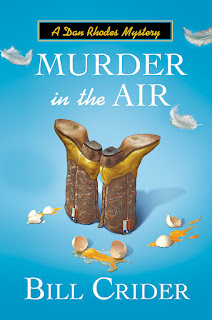 I'm a big fan of Bill Crider's Sheriff Dan Rhodes series and his many other suspense and western titles as they are funny and very smart.   Molly and I were delighted he agreed to participate in Warm Up with Flaming Foods month. -AA

The sad fact is that I'm not much of a cook. When I grew up, my mother never thought about teaching her sons anything about what went on in the kitchen, other than how to wash dishes. I'd rather not have learned that part.


When I got out on my own, I was forced to learn a little bit about cooking, but I never learned much. The one dish I specialized in was beanie-weenie. When I got married, my wife took over the cooking duties (I was still stuck with washing dishes for several years until we got a dishwasher). Kids came along, and I was sure they'd love my beanie-weenie. So when they were old enough, I prepared it for them. The first time they didn't seem too terribly thrilled. The next time, they refused to eat it. But I thought it was pretty good, and it's spicy. That should count for something.

Here's how it's done:
Ingredients:

1 16-oz package of weenies My kids always liked Oscar Mayer weenies, probably because of that song some kid sang in a commercial, so that's what I bought. Not that it helped.

Some ketchup. I don't measure. I just put some in. Maybe half a cup.

Some Woorchestershire sauce. I always use Lea & Perrins. That's what my mother used, so I figure it's the best.

Some vinegar. Not much, about a tablespoon.

Some brown sugar. Again, not much. Tablespoon or less.

A dash or two of Cholula hot sauce – the secret ingredient.

Directions:
Chop up the onion. Cut the weenies into little pieces. Put all the ingredients in a boiler and mix 'em up. Put the boiler on the stove and bring the ingredients to a simmer. Cook for a half hour or so. Serve warm. Maybe your kids will like it more than mine did.
Posted by Amy at 6:11 AM

Our only kid still living at home is a vegetarian, which kind of takes the fun out of Beanie-Weenie. I guess I could toss in soy dogs, instead, but that makes it more like Beanie-Beanie. On the other hand, my husband LOVES beans and weenies and this looks like a great version. Thanks for the recipe, Bill! I think I'll make your Beenie-Weenie tonight and start the new year out right.

Amy
Amy Alessio unleashes her extensive vintage cookbook and craft pattern collection on the unsuspecting public through her presentations and this blog. Mystery author Molly MacRae guest blogs with an unusual recipe every First Monday.

Slideshow: Stories Available on Kindle and Other E-Sites - with Recipes!

I was reviewed by the Kindle Blog Report!